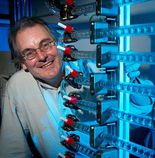 Professor of Physical Chemistry at the University of Bath

Director of Research, Department of Chemistry

Fresh-faced from a PhD in Physics from the University of Dundee (following a Chemical Physics degree from Glasgow), in 1985 Chick joined the then SERC Rutherford Appleton Laboratory in Oxfordshire as Deputy Instrument Scientist for the SXD instrument on the ISIS spallation neutron source (initially known as the SNS). He rose through the ranks at ISIS, to Instrument Scientist, Deputy Group Leader and then Head of the Crystallography Group, as ISIS and RAL sequentially became part of EPSRC, DRAL and CCLRC.

He led the ISIS Crystallography Group for 12 years from 1992-2004, the group running busy user science and instrument development programmes in powder and single crystal neutron diffraction. In parallel, Chick's scientific programme was evolving, largely focused on the newly available potential for neutron single crystal diffraction on the SXD instrument on which he was building, developing and supporting a growing scientific programme including a busy user programme. From this user programme developed many of the collaborations in which Chick has been - and still is - involved. The link with academia always strong within this programme - Chick was Visiting Lecturer at the University of Reading (J J Thomson Physical Laboratory) close to RAL from 1993-1996, and Visiting Professor in Chemistry at the the University of Durham in 2001, largely working with the groups of Professor Judith Howard and Professor John Evans.

Chick accepted the Regius Chair in Chemistry at the University of Glasgow in 2003, initially on a joint appointment with CCLRC (now STFC), retaining his responsibilities there. This rapidly evolved into a full time position in Glasgow, and Chick formally left CCLRC in 2004, after 19 years at RAL. His links with the neutron community remain strong, with an extensive scientific programmes at ISIS and ILL Grenoble (where he Chairs the Scientific Council) and a recent Adjunct Professor position in Chemistry at the University of Tennesse, Knoxville, close to the new US Spallation Neutron Source at Oak Ridge National Laboratory.  He has been involved in STFC advisory roles, including as Deputy Chair then Chair of the Physical and Life Sciences Committee (PALS; 2007-2009), and has recently been appointed to the STFC Science Board, providing advice to that Research Council on its provision of facilities for research.

In 2010, Chick relocated his group to the University of Bath, where he took the Chair of Physical Chemistry.  Initially Head of Physical Chemistry, he is now Director of Research in the Department of Chemistry.  The group are now established with a wide-ranging programme of research in structural chemistry (their traditional area, including extensive work in crystal engineering and solid state molecular materials design), in crystallisation science (particularly for continuous manufacturing applications), and in functional materials chemistry (focused on the development and implementation of metastable state molecular materials).  He enjoys carrying out this science with a range of collaborators and consortia, including the CMAC Centre for Continuous Manufacturing and Crystallisation (Strathclyde), the M4 Metastable Materials programme (Bath), the DySS Dynamic Structural Science consortium (Harwell) and the EPSRC Grand Challenge in Directed Assembly (beyondthemolecule.org).

Group Leader Chick Wilson is part of a team awarded £1.5M EU ERDF funding for Sustainable Technologies.  The team is led by Prof Matt Davidson, of the Centre for Sustainable Chemical Technologies, and is a collaboration with the Univ Innovation Centre

Work led by Dr Karen Robertson and Pierre-Baptiste Flandrin has been featured by our industrial collaborator Vapourtec, with whom we have been working to develop capabilities for particle control within flow chemistry.

Lauren Agnew recently undertook a four-month secondment at Astra Zeneca as part of the CMAC industrial placements scheme.  Lauren writes about her experience here, and liked it so much she has recently taken up a position at AZ!

The group were well represented at the recent ISIC20 conference in Dublin, with posters from Lauren Agnew, Ruth Lunt and Lois Wayment, and Alex Cousen presenting a talk at the meeting.